According to S&P Global Market Intelligence,  shipments of Android TV devices, worldwide, are set to increase more than five-fold between 2016 and 2021. 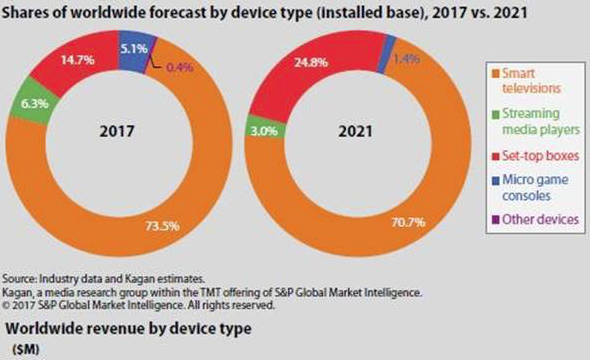 The research firm said that smart TV and set-top boxes will be the two dominant devices of choice for Android TV, with smart TVs expected to be the “primary driver” of the Android TV market.

Worldwide shipments of all Android TV devices – including STBs and smart TVs – are projected to increase from 7.6 million in 2016 to 40.1 million in 2021.

On the TV front, Toshiba, TCL and Bang & Olufsen released Android TV models in 2017 and S&P said it expects smaller manufacturers to also start supporting the operating system in the near future.

Android TV unit shipments are expected to increase from 5.5 million to 27 million over the same time period, while the installed base should climb from 14.6 million in 2017 to 80.3 million by 2021.

The report said that some “notable movement” in the STB market was seen this year with both DISH and DirecTV in the US announcing Android TV boxes. Bouygues Telecom in France and NTT DoCoMo in Japan are also due to introduce new Android-powered STBs in 2018.

Keep updated with our own Android developments by following us on Twitter. We are integrating DTVKit into Android TV with our first release expected this year!

« Eurofins win contract with RiksTV for DTT testing HbbTV Symposium: What did we learn? »